Adelola Edema is involved in Special Needs advocacy.  Through her annual conference, the Special Needs Conference, she educates members of the society on inclusion and engagement of people with special needs in schools, churches, and the workplace. She consults for churches (helping them include children with autism in their children’s churches) and organizations seeking to host individuals with autism at events. She also facilitates training for teachers and parents on effective teaching strategies for children with autism and other related disorders 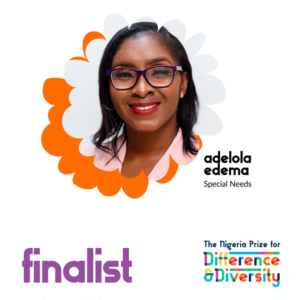 Chisom Ogbummuo is the Founder and Executive Director of The Conversation Café, a safe space for transformative and educative conversations and activities that engenders social impact.

She is the producer of HER, a short film that spotlights the current issues relating to the girl child such as period poverty, child marriage, child molestation, rape and environmental issues. Chisom is a member of the United Nations Association of Nigeria. In 2016, she set up the Association of International Affairs for students of the University of Lagos to create awareness and participation in achieving the UN Sustainable Development Goals. Chisom runs a Sanitary bank under The Conversation Cafe which provides hygienic sanitary pads and care kits for girls in undeserving communities. In 2018, she was a nominee for Eloy awards category for Empowerment and in 2019, she won the category for social entrepreneur of the year. Chisom is also a seasoned speaker who co-hosts TW Conversations, a television talk show focused on societal issues and an on-air radio personality at Africa Business Radio where she unravels Issues related to lifestyle and Business of her guests and organizations on her show called “Strip” which also airs on her YouTube page called Conversations with Chisom. 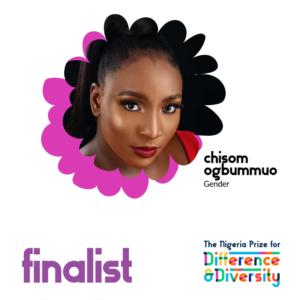 He has obtained training and Certifications in Biochemistry, Life Coaching, Trauma-Based Cognitive Behavioral Therapy, Hypnotherapy, Mental Health Studies, Human Nutrition, Psychological First Aid, and Psychology to mention a few. As a therapist, Toluse offers an integrative method of working with his clients in areas such as depression, substance use, anxiety, relationship matters to mention a few. 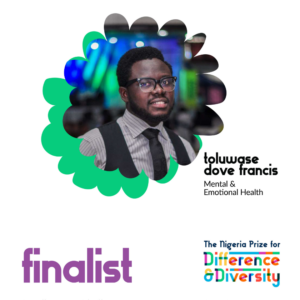 Desmond Vincent is a twenty-one-year-old writer and award-winning journalist living in Nigeria. With his work, he attempts to document the realities of queer people living in Nigeria and the cultural shifts happening involving and revolving around them. He has contributed to publications like i-D, Dazed, VICE, NYLON, PAPER, Mail and Guardian, and many more. 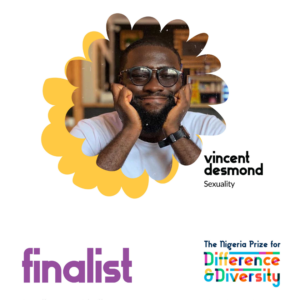 Ani Kayode Somtochukwu is a Biologist, Journalist, Author, and Queer Liberation Activist who lives in Enugu, Nigeria. He earned a Bachelor’s degree in Applied Biology from the Enugu State University of Science and Technology. His work centers on queer identity, resistance, and liberation. His writing has appeared in The Enkare Review, The Rustin Times, Gertrude, Bakwa, and Plenitude Magazine, among others. He was awarded SOGIESC Rights Activist of the Year by The Initiative for Equal Rights (TIERs) in 2019. 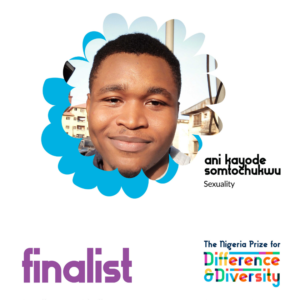 Solomon O. Ayodele is a Boy Child Advocate, Afrophile, Social Entrepreneur & Digital Transformation Enthusiast. He is the Founder/Lead Execution Officer of Boys’ Quarters Africa, one of the foremost boy child transformation movements in Africa and he leads a team of over 127 volunteers across five cities in Africa, in driving the strategic pillars of the organization – leadership, empowerment, education, and advocacy. Solomon is the convener of the Boys Too Project, a continent-wide campaign on the sexual abuse of the Boy Child. He is also the host of the yearly Exchange Project and Academy held at different Special Correctional Centre for Boys. He recently hosted Africa’s first International Boy-Child Summit, with over 1,700 viewership across the world. 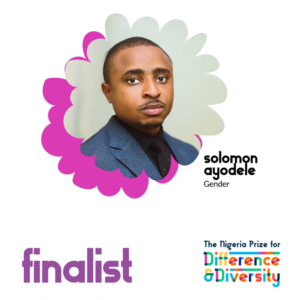 Daniel Orubo is a senior editor and producer at Zikoko, whose work focuses on music and lifestyle. He is also the creator of Zikoko’s ‘Sex Life’ an anonymous series that explores all the nuances of sex and sexuality in the lives of Nigerians of different orientations and gender identities and ‘Blind Date’ series.” 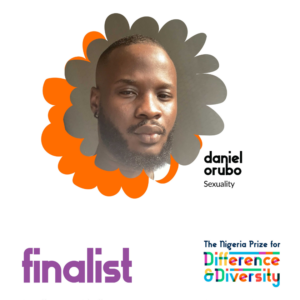 Sada Malumfashi is a writer and a freelance journalist and one of several scholarship holders of the Berlin Reporters Without Borders Scholarship Program. As a journalist, his works focus on the topics of pleasure and sex as well as with the queer culture that can be found in the Hausa literature, sexual abuse, gender-based violence, and feminism in conservative northern Nigeria. He was one of the first journalists to report on the #ArewaMeToo uprising in northern Nigeria, which is directed against violence against women and how men get away with impunity.

His successes include participating in the literary exchange program for Nigeria and Cameroon of the Goethe Institute and a 2018 writing fellow of Sylt Foundation in Germany as well as a 2019 Omi Writers Fellow in the United States.

Tobiloba Ajayi has over 10 years of experience working with various organizations in the Disability Management sector in different countries. She holds a degree in Law and was called to the Nigerian Bar in 2008. She also holds a Master’s Degree in International Law. In 2017, she Launched ‘The Let Cerebral Palsy Kids Learn Foundation to promote inclusive mainstream education for children with Cerebral palsy in Nigeria. To date, the project has provided support to over 350 children and their families and enabled about 75 of these children to access inclusive education. 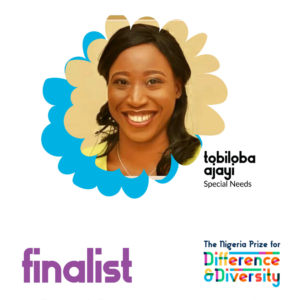 Mike Daemon currently serves as the executive director of NoStrings Development Initiatives, a queer-led and focused organization he founded in 2015.  He serves as the board of Saint Paul’s Foundation for international reconciliation, a U.S nonprofit organization. He is also the co-founder of the African Human Rights Media Network, a network of media personalities and organizations using the media to advance LGBTIQ equality in Africa. In 2o19, through his organization, Daemon launched Nigeria’s first and only social and counselling android-based app for the Nigerian queer community through which they are able to gain access to non-discriminatory legal and health assistance. 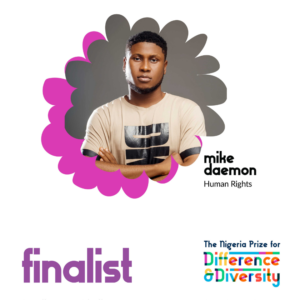 Michael Ernest Nwah advocates and creates spaces for Mindfulness, Meditation, and Yoga. He is the owner of The Yoga Spot and the creator of Meditate Africa and has helped popularize yoga placing Nigerian emotional health and wellness on the map. His work also includes inclusion and decolonization of the wellness space in Nigeria and Africa. He is also the first African ambassador for International eco-friendly yoga brand Liforme. He is one of the few people in Nigeria pushing to elevate the collective mindfulness and consciousness of African people. Michael has also introduced yoga to children in low-income neighbourhoods, led sessions with various women groups like Lakeboone Breast Cancer foundation, Her Girl Tribe, etc.

His work has been featured on BBC Pidgin, Ebonylife, MTVbase, BBC pidgin, etc. 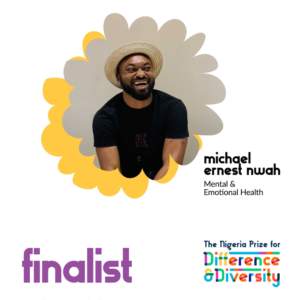 Angel Nduka-Nwosu is a writer, journalist, editor and feminist. She is the co-founder of As Equals Africa, a media advocacy group that aims to support African Feminist writers and creatives to question sexist ideas through writing, art and media. As a feminist, she created the #SayHerNameNigeria hashtag which led to protests in four Nigerian cities, Ghana and England condemning the rape and harassment of women by the Nigerian police in Abuja. As a writer, she runs a blog called As Angel Was Sayin’ where she writes on topics such as gender roles and the ills of sexism. She also hosts a feminist podcast show called The Highly Disobedients which encourages Nigerian women to rethink sexist traditions. She also dedicates her time on her social media platforms to speak against rape seen in universities and moderated anonymous support groups of women dealing with campus sexual assault for the British Broadcasting Corporation. 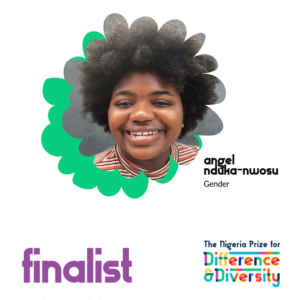 Elizabeth Talatu Williams is the Executive Director of the Sustainable Impact and Development Initiative working to advance the Sexual Reproductive Health and Rights (SRHR) of young people. Elizabeth is also the Deputy National Coordinator of AFRIYAN Nigeria, coordinating 30 youth-led organizations working on the SDGs. ‎Elizabeth served as a panellist at the International Center for Research and Women (ICRW) side-event in New York and a speaker at the ICPD25 Conference in Kenya advocating for the SRHR of young people. She is also involved and advocated for the integration of sexuality education into non-formal vocational training in Lagos state. 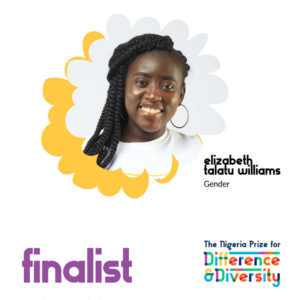 Ezeigwe Juliet Chioma is a filmmaker, development communications expert (PR and Digital Marketing), and gender equality advocate. A speaker, trainer and filmmaker specialized in producing, directing and distributing stories, that has a global appeal on advancing global goals for women and the girl child. Her key interest lies in entertainment, tech, media, development communications, women and girl child empowerment and advocacy. She is the producer of a short film ‘The Consequences’, a short film that mirrors one of the many challenges women face in their relationships. She is also the Team Lead and Media director at Jules TV films, a youth-led NGO and media organization that raises public consciousness and advocates against sexual and gender-based violence and advances global goals for women and the girl child through storytelling, conversations, and advocacy. 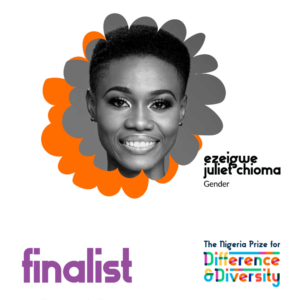 Zainab Adakole is an activist, program officer and community mobilizer, with Women Initiative for Sustainable Empowerment (WISE), an organization responsible for mobilizing and planning interventions for adolescent girls, young women and women who identify as queer.  She has in the course of her work with WISE. Her work in the Communities of Kano and Kaduna brings about ripples of positive change that sparks hope in the midst of adversity and adversely harsh socio-political environment.  She is a young queer woman, who is very committed to the work of eradication of all forms of violence towards queer women and girls in the core of northern Nigeria. 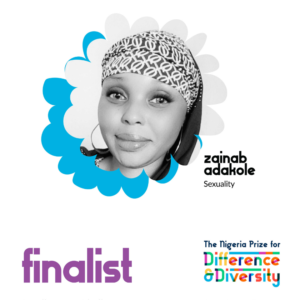